During the panel discussion “Legal regulation or self-regulation: is there a need to choose?”, held on February 11, 2016 as a part of the First All-Ukrainian Forum “Effective Distribution and Market Penetration: Legal Aspects”, organized by the Arzinger law firm, the UCRFIN Association Director Dr. Oleksandr SAKHARENKO presented the participants the Forex market’ vision on self-regulation.

In particular, it was noted that on the present stage the retail Forex business in Ukraine was not regulated, which created significant risks for customers and the market. T

his primarily referred to the absence of any restrictions for the activities of frauds and pyramid schemes. Considering that, the discussion on the introduction of the regulation had started the parliamentary level, in which the UCRFIN Association’s representatives took an active part.

Ukraine’s specificity in this context was that the market size was relatively small in terms of the scale of tasks performed by the key regulators of the financial market – the National Bank of Ukraine and the National Securities and Stock Market Commission. Active market regulation would, thus, divert inadequately large resources and require a rather narrow competence that was not always in the regulators’ interests. “This is one of the reasons, why the combination of regulation in the form of licensing and of self-regulation can be considered as appropriate under current conditions. This is confirmed by the practice of many developed countries”, – said the UCRFIN Director.

Thus, to the Forex market the so-called “strict” or “defensive” self-regulation model could be applied which was already working in the stock market, when membership in an SRO was a prerequisite for the market operations. Consequently, without the admission to or exclusion from an SRO the market access would be closed, despite the possession of a license issued by the regulator. This model, provided the equality of all participants and the transparency of decisions within the SRO were secured, could be quite an effective tool for the market’s self-control and non-admission to it of companies whose activities bear the signs of dishonesty.

In the context of the discussion on the retail Forex regulation the creation of a compensation fund, from which the clients 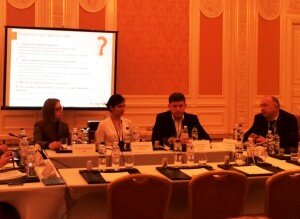 who had suffered from violations of a member company or its bankruptcy would be paid, was being discussed. This would strengthen the mutual control on the market. At the same time, the SRO should possess sufficiently strong, but transparent mechanisms of monitoring the activities of its members within its area of competence and of influencing them. This could be achieved, in particular, through the licensing of SROs by the regulator and monitoring of their activities on its part.

Dr. SAKHARENKO also informed of the development of the Code of Standards, Rules and Good Practices in the Retail Forex Market by the Association, which was intended to regulation of a range of relationships that probably would not be covered by the anticipated legislation for a number of objective reasons. The aim was, first of all, to protect customers from fraud activities of companies, to specify the rights, duties and liability limits of Forex dealers, their agents and representatives, to introduce ethical standards, particularly in the field of advertising, etc. An important aspect was fixing the procedures for dealing with customer complaints on the activities of Forex companies and the role of SROs in resolving conflict situations.

In the process of the Code’s development the UCRFIN was based on the assumption that its signing and fulfilment would be linked with the membership in the Association. I.e. it’s rules would be binding. For repeated violations of procedures of issuing warnings and instructions as well as of suspension of membership in the Association with all that it implied, were provided.

“The implementation mechanism that will combine regulation and self-regulation, and the presence of a binding Code of Standards and Rules will be, in our opinion, an extremely effective way to protect customers of retail Forex companies and the interests of market players who are suffering reputational and financial losses due to the dominance of frauds and pyramid schemes”, – concluded the UCRFIN Association Director.